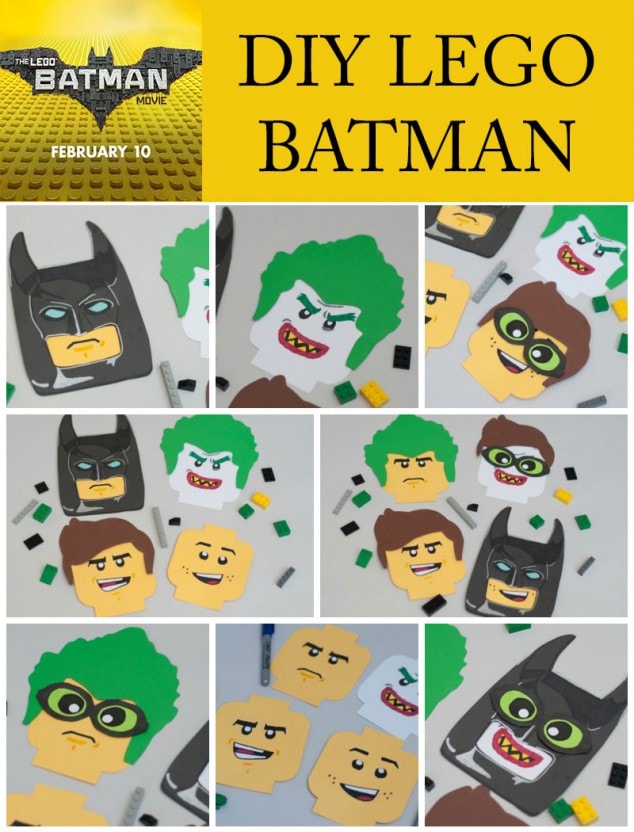 My WHOLE family is super excited to see the new The LEGO Batman Movie in theaters this Friday. My kids LOVE LEGO anything. The toys, movies and even games. So I knew a LEGO craft would be perfect for my kids. I had them pick a couple characters from the movie that they wanted to do.  Of course they all choose Batman right away, then Robin and Joker.  I thought Harley would have been pretty cool too, but we wanted the craft to be interchangeable.  Like the Joker’s hair on Batman with Robin glasses.

Since there is quite a bit of drawing with this craft, I geared it more towards 8 year olds and up. BUT the parents are always great to help out with the younger kids.  Plus you don’t have to go as detailed as we did with your craft.  As long as you have your LEGO shaped heads, you can’t go wrong.

This post is in partnership with Warner Bros. Pictures.

All I needed for this craft was cardstock and some markers.  We used Sharpies, but a basic Pack of markers has all the colors we used in it. 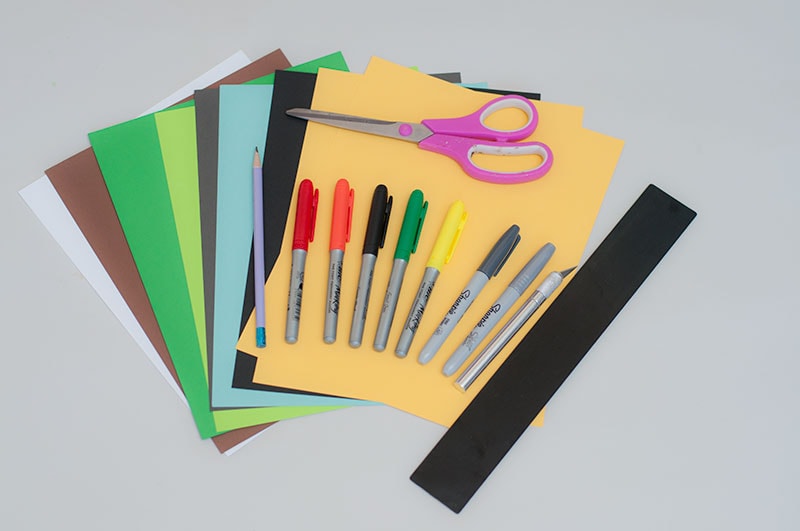 The head shape is such a basic shape to draw out. 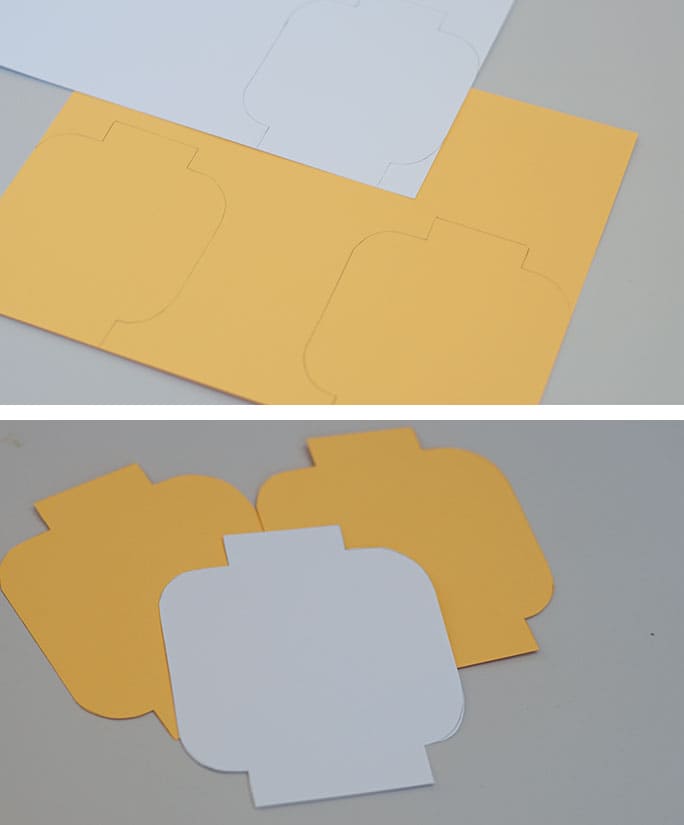 We felt that the facial features were pretty basic and easily replicate.  I pulled up an image on my phone to look for our inspiration.  I suggest drawing it out with a pencil first. 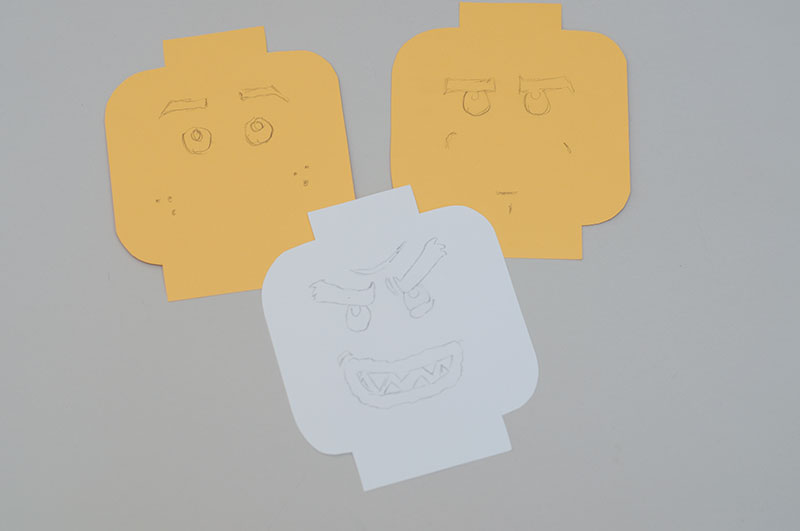 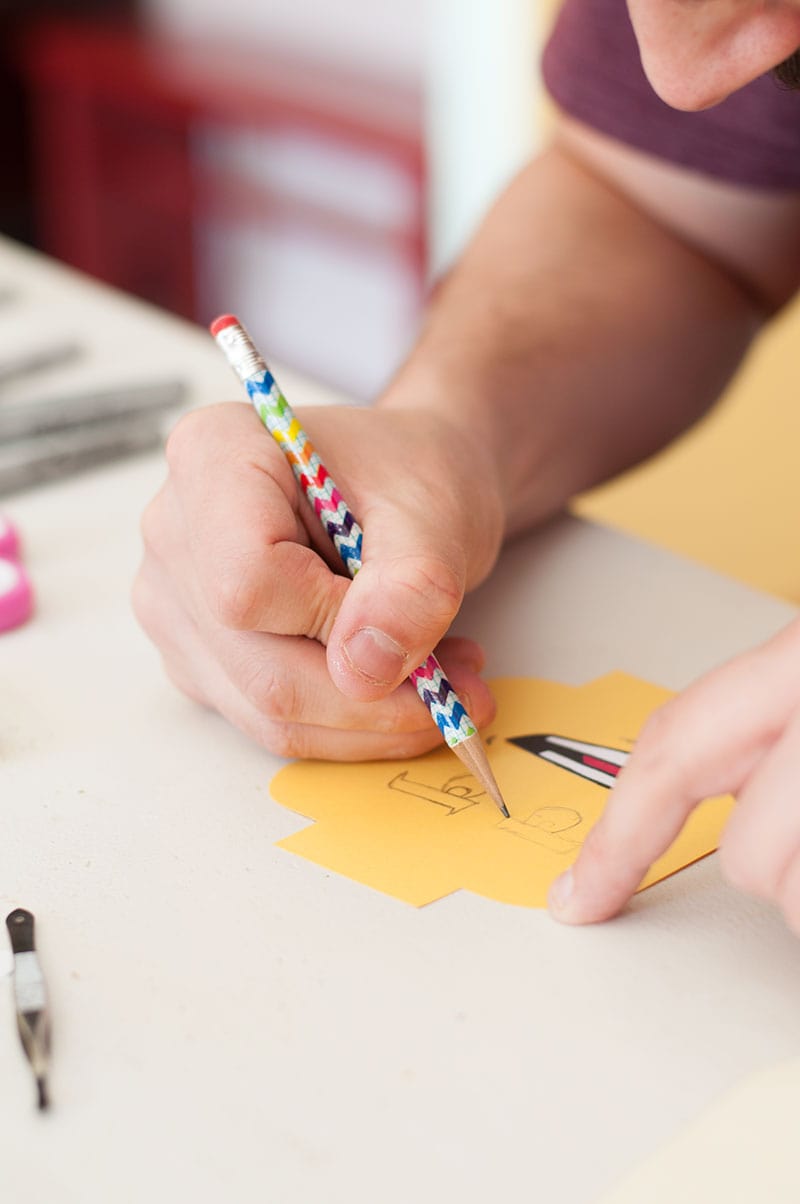 We ended up having the make a separate mouth for LEGO Batman because of his teeth.  Why don’t they sell white markers?!?!

Again we traced out the mouth shape and filled in with our markers. Then we cut it out and glued it to the face.  Just make sure you’re putting the mouth in the right spot for LEGO Batman. 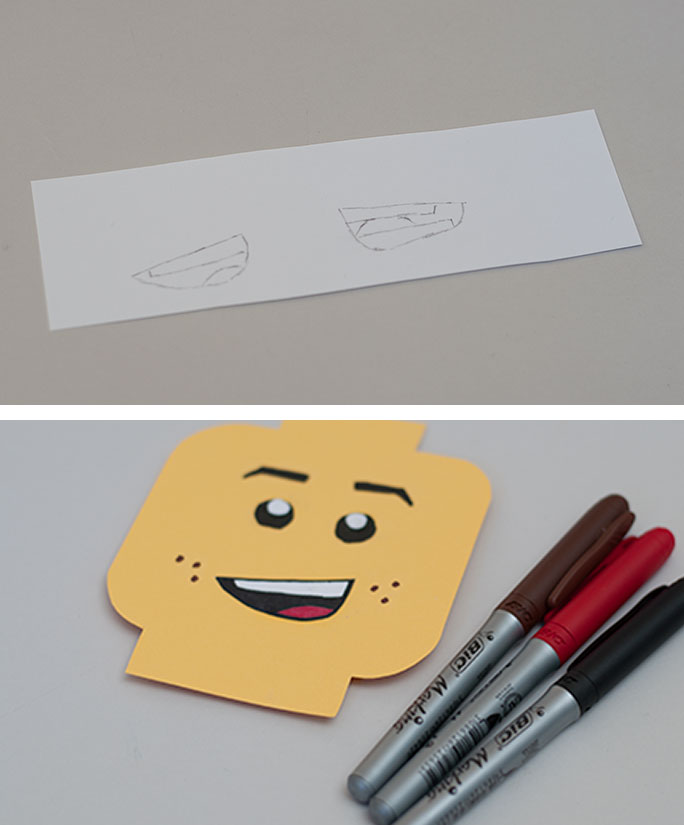 We pulled out the color sharpies we needed to each character.  Then got started filling the their features.  What I love about the characters, there’s no shading or little details that need to be done. The Jokers eyebrows are one solid color of green.  Batman’s mouth is black and white. Robin just use a little brown for his freckles.  Super easy right?!?! 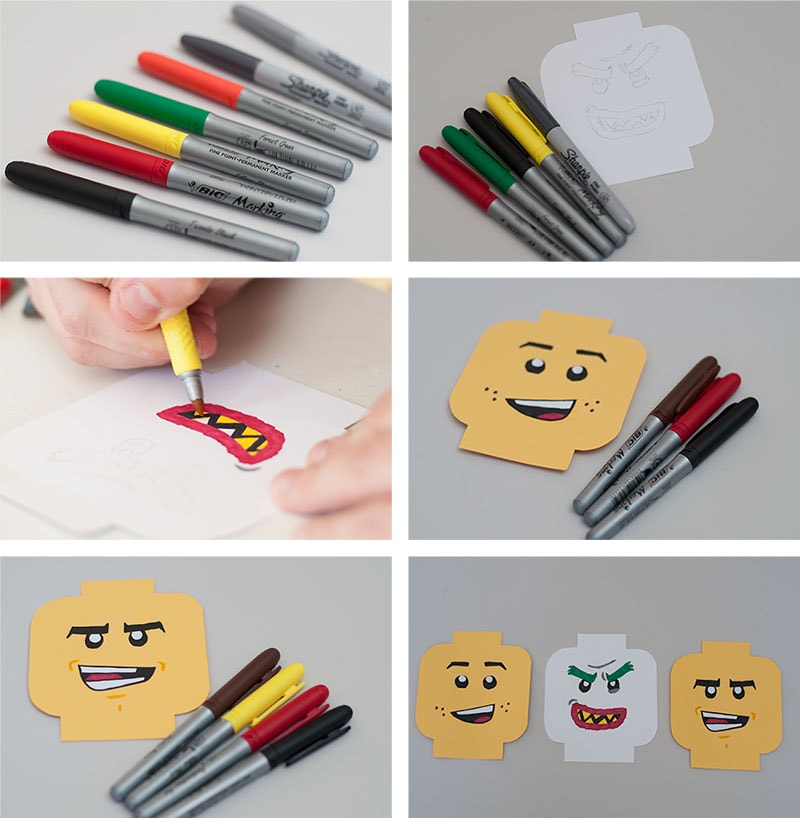 Step 4 – Draw and Cut out Hair/and or Mask

This is probably the hardest part, but it’s not as bad as you think.  We laid our heads on top of the cardstock, green for Joker.  Then Started to draw the top part of the hair. Then take your head off and start filing in the rest. 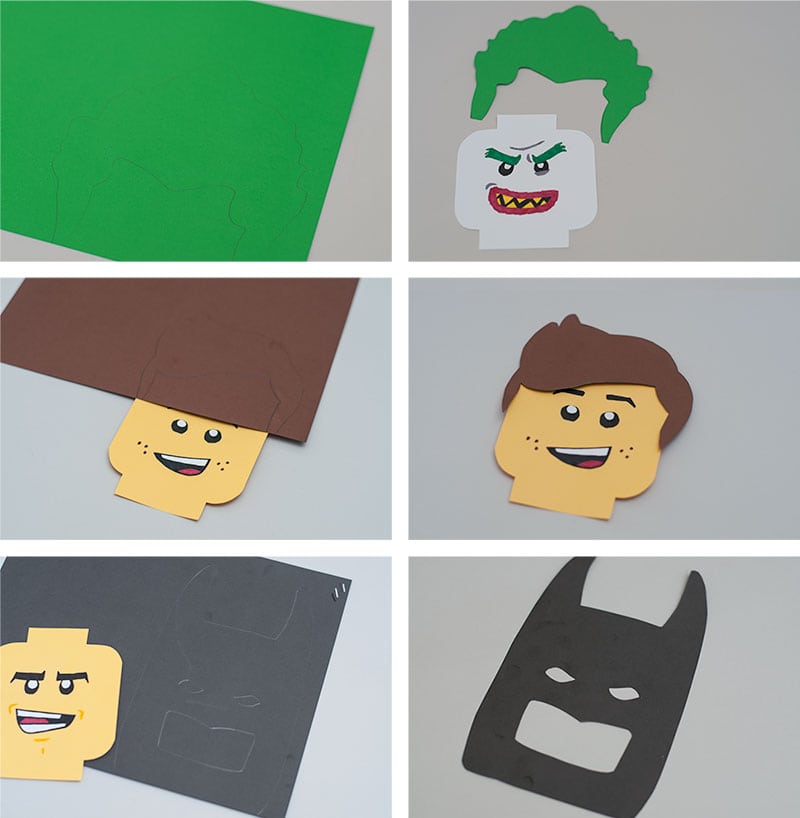 With Batman’s mask we did add some details with a gray sharpie, but that’s totally optional. 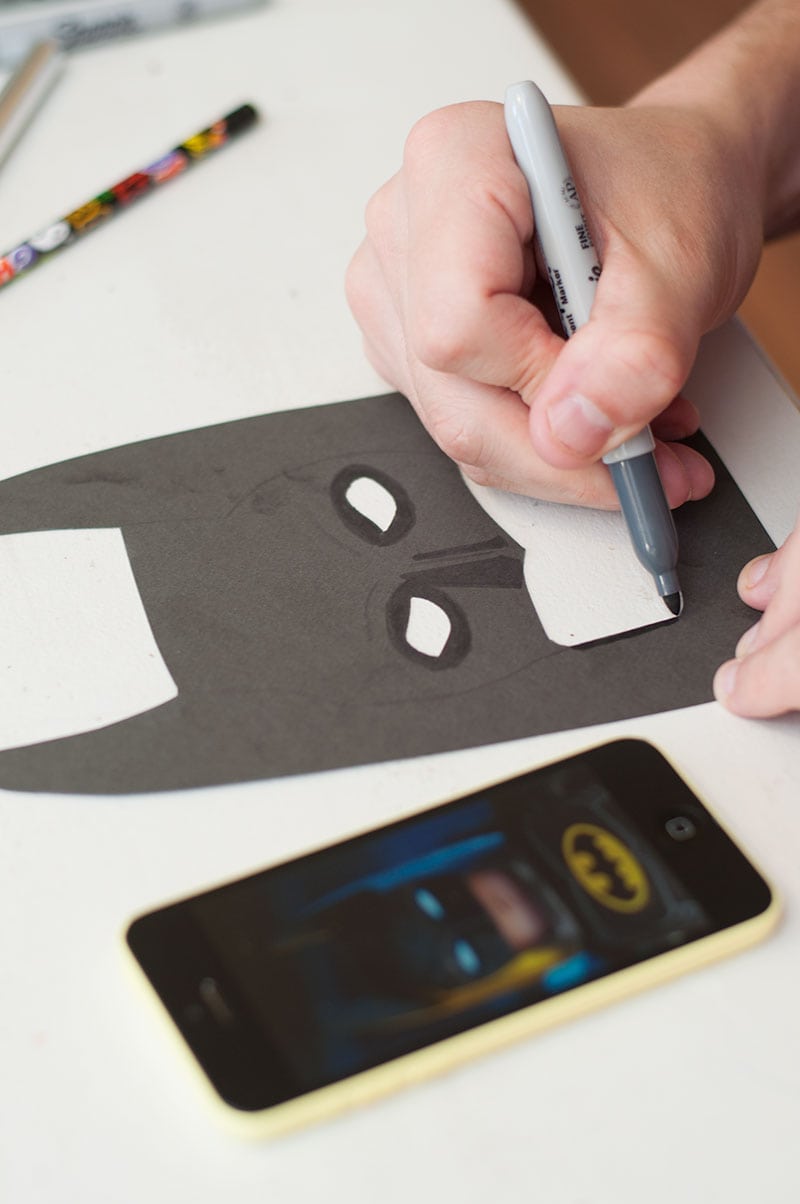 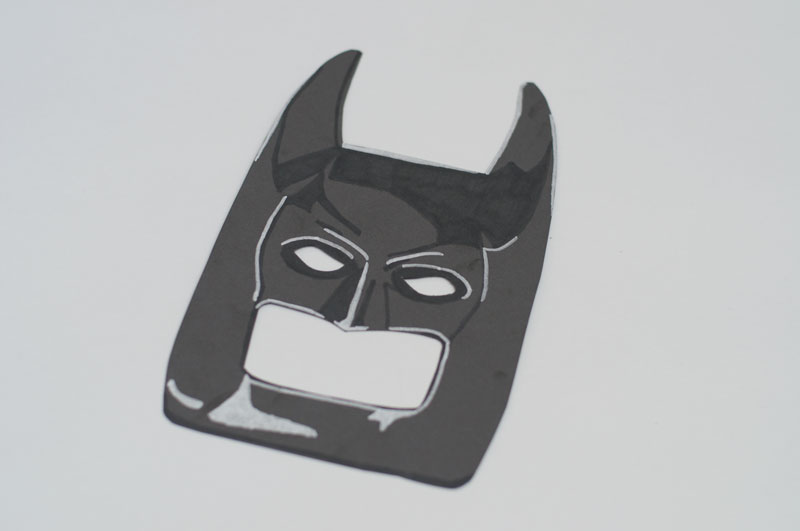 Finally for the goggles, we traced out our shape in black cardstock.  Then we cut out circles for the green part and glued it in place. Then we used a black marker for the eyes and white cardstock for the center of the eyes. 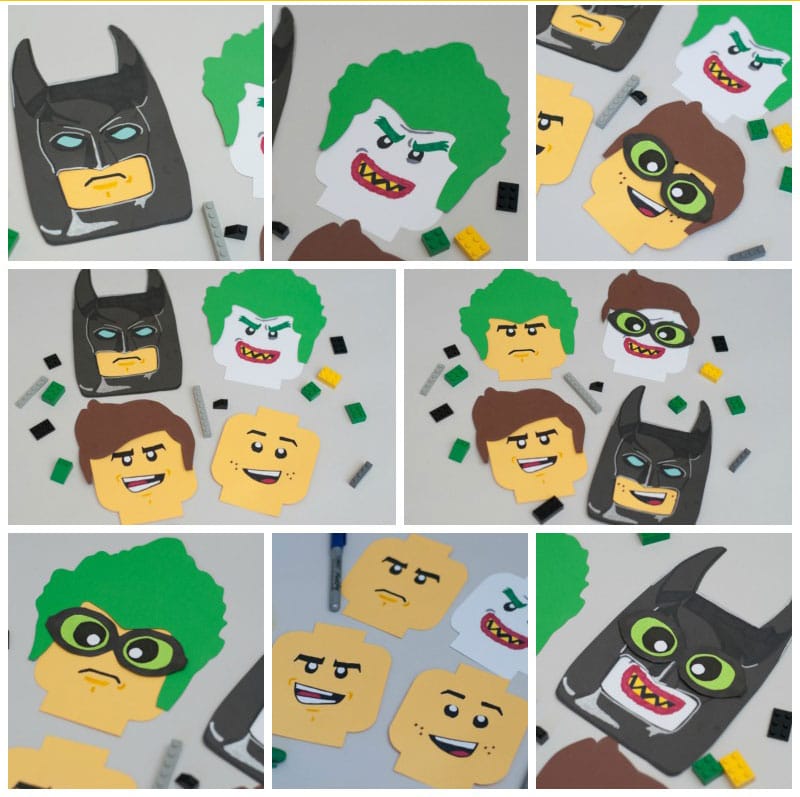 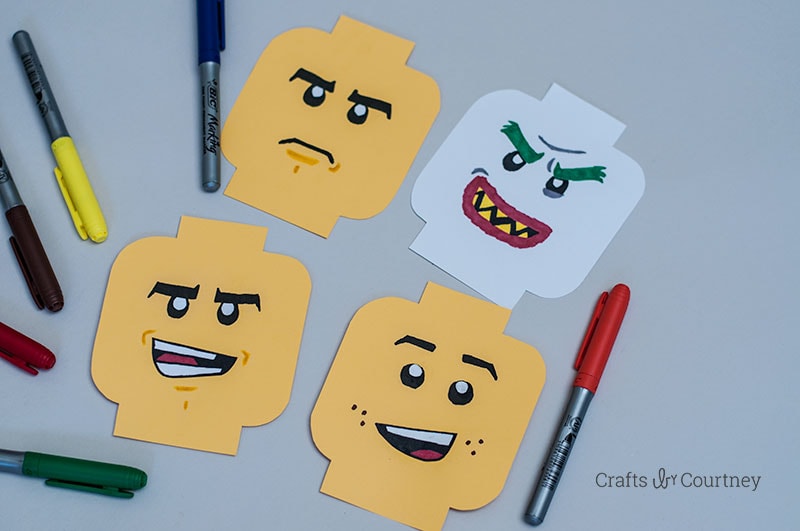 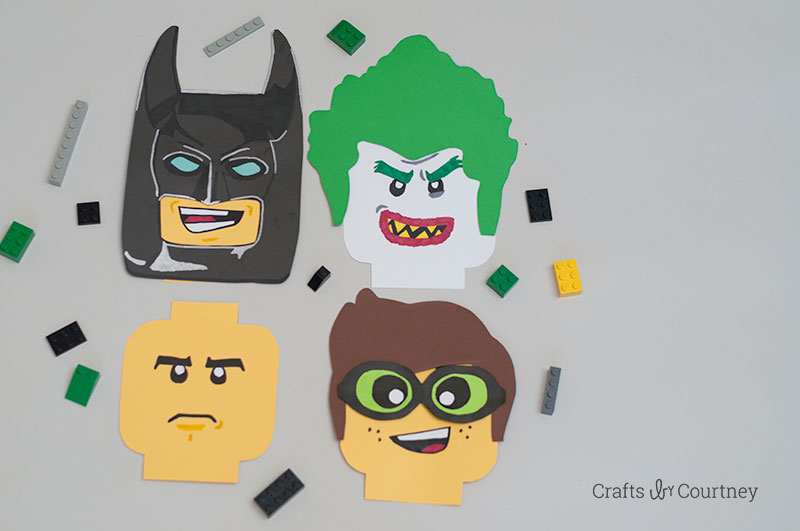 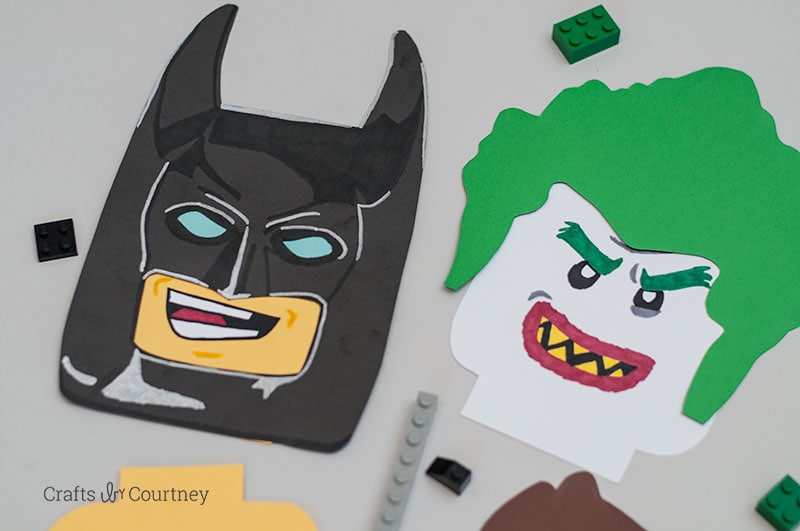 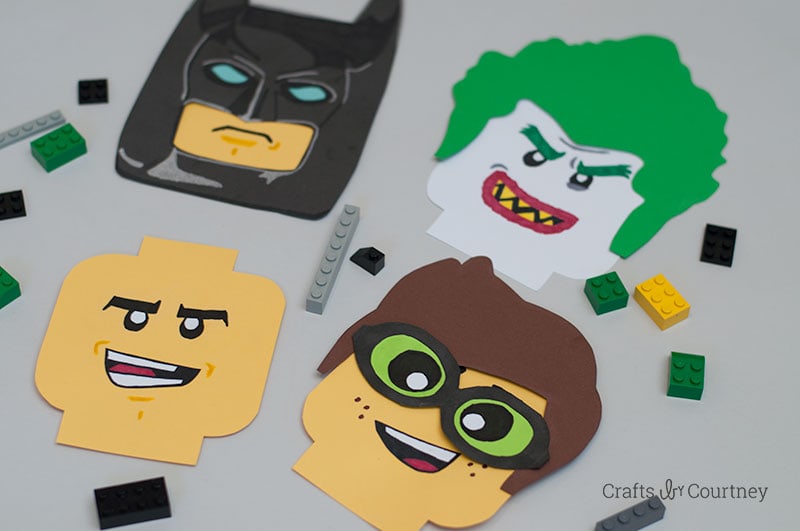 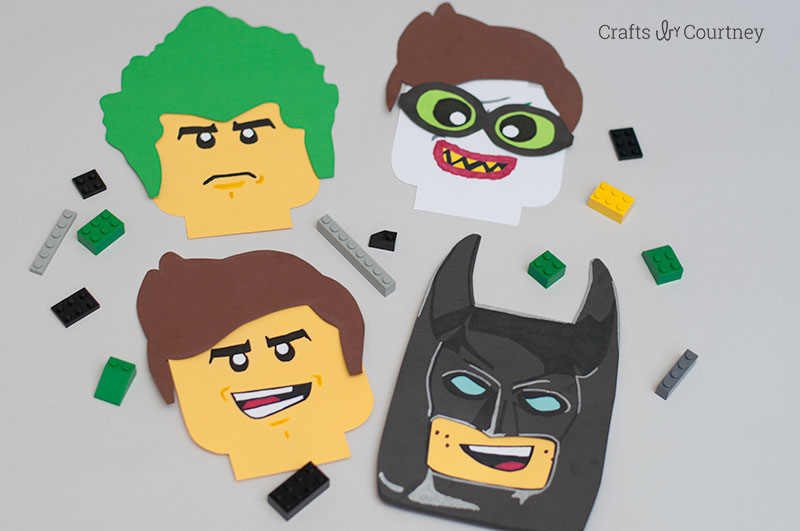 YAY I seriously LOVE how they all turned out! You can mix and match and create new characters! 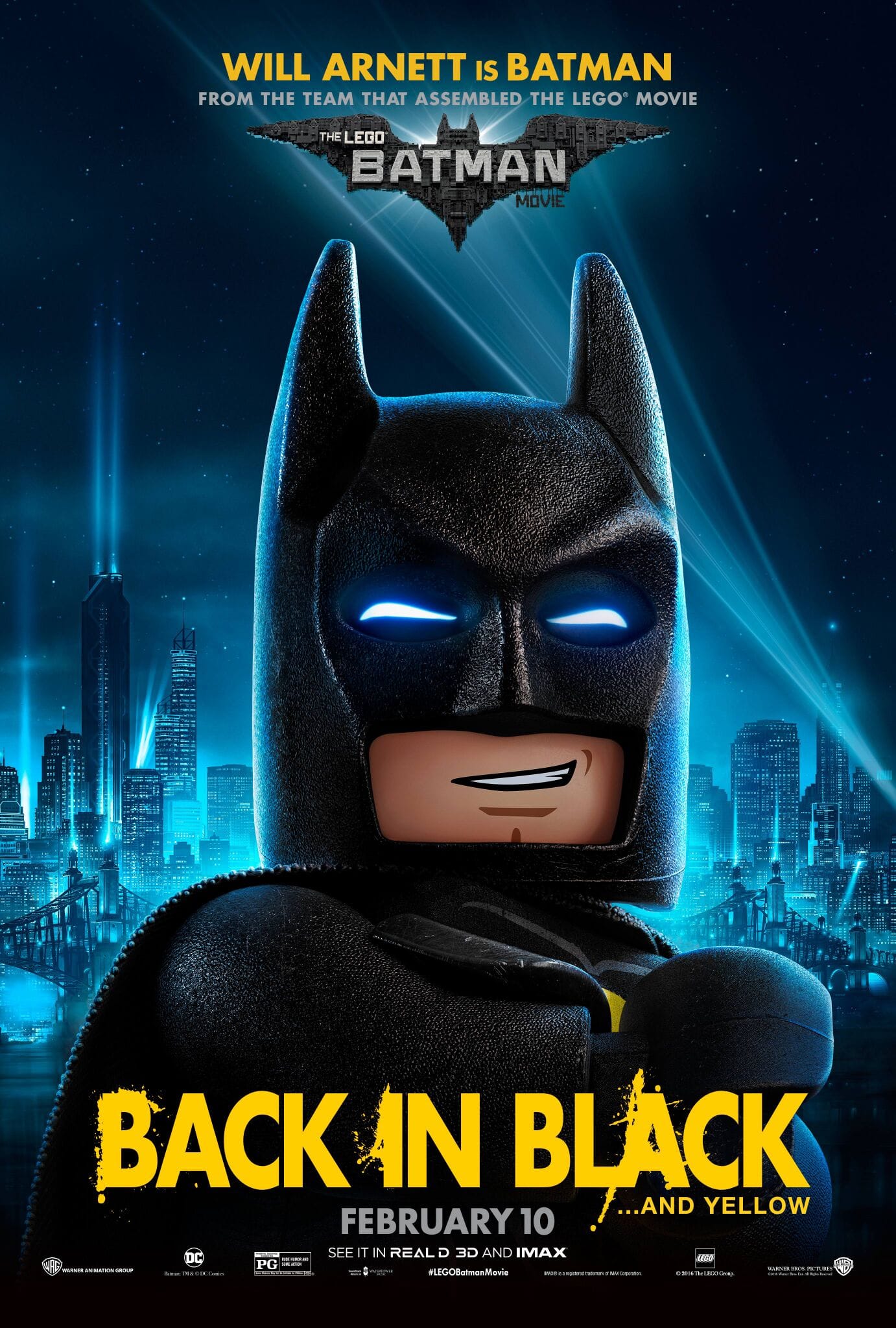 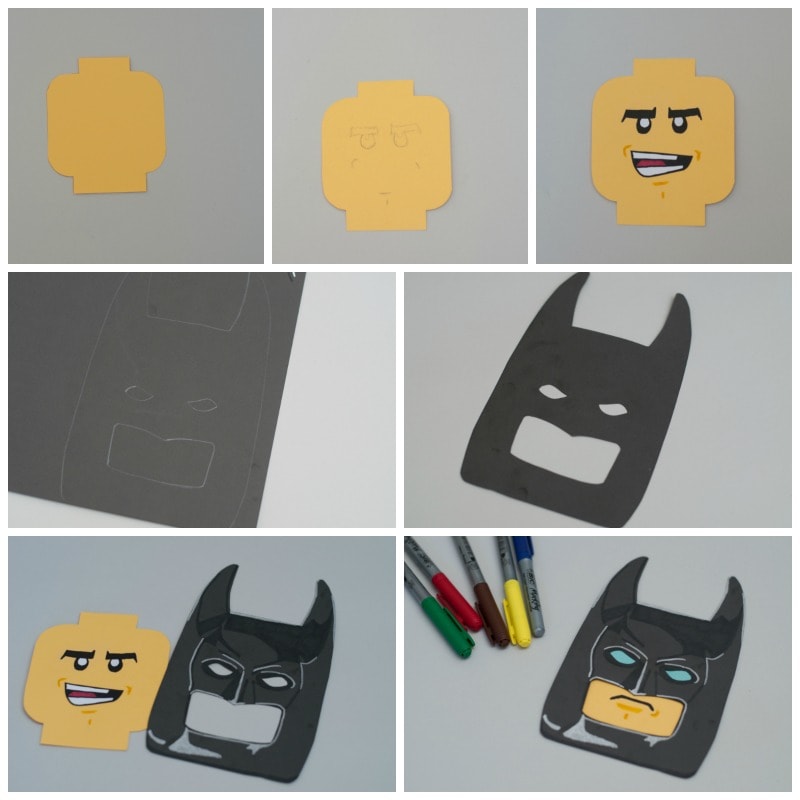 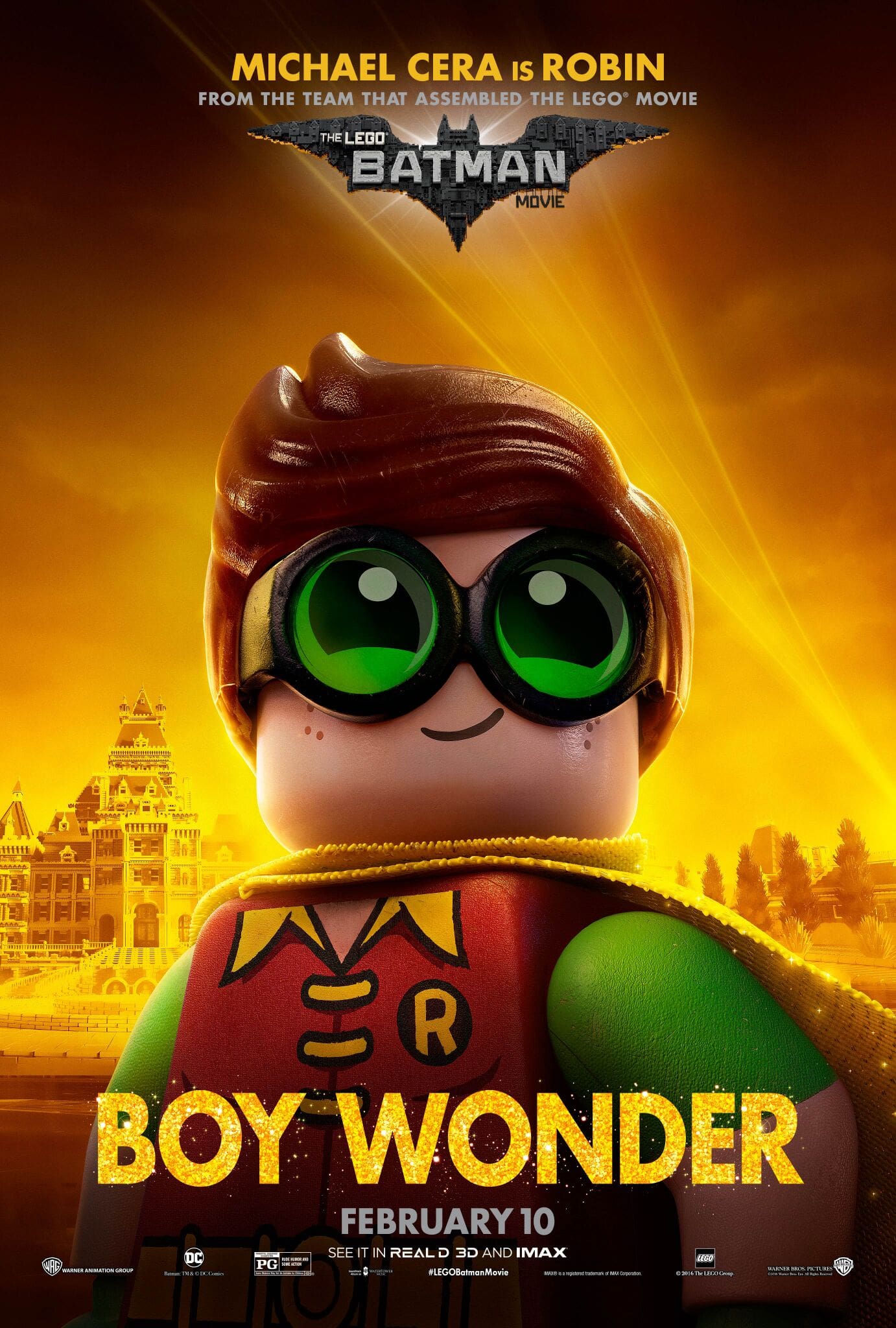 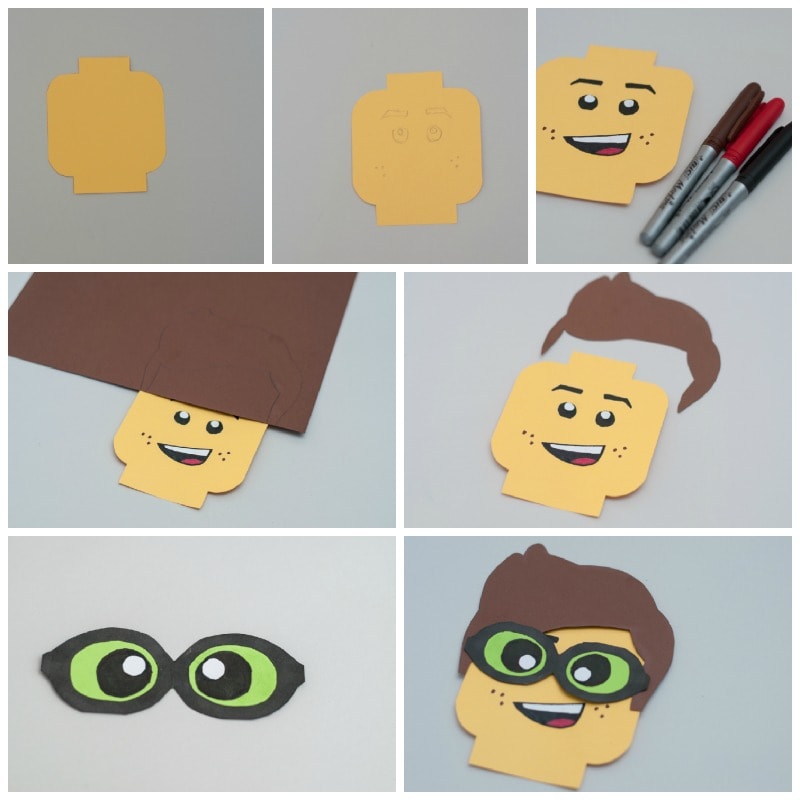 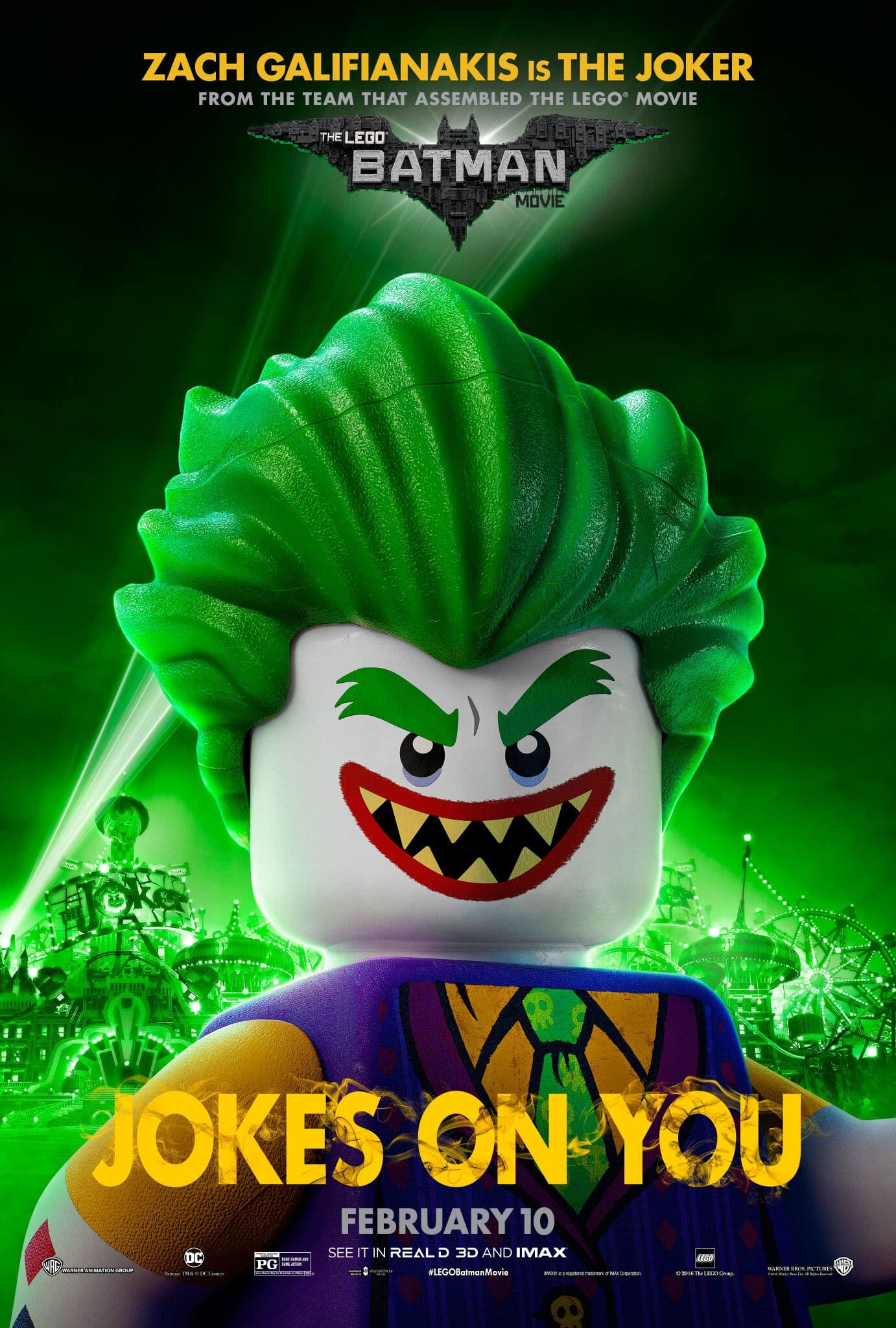 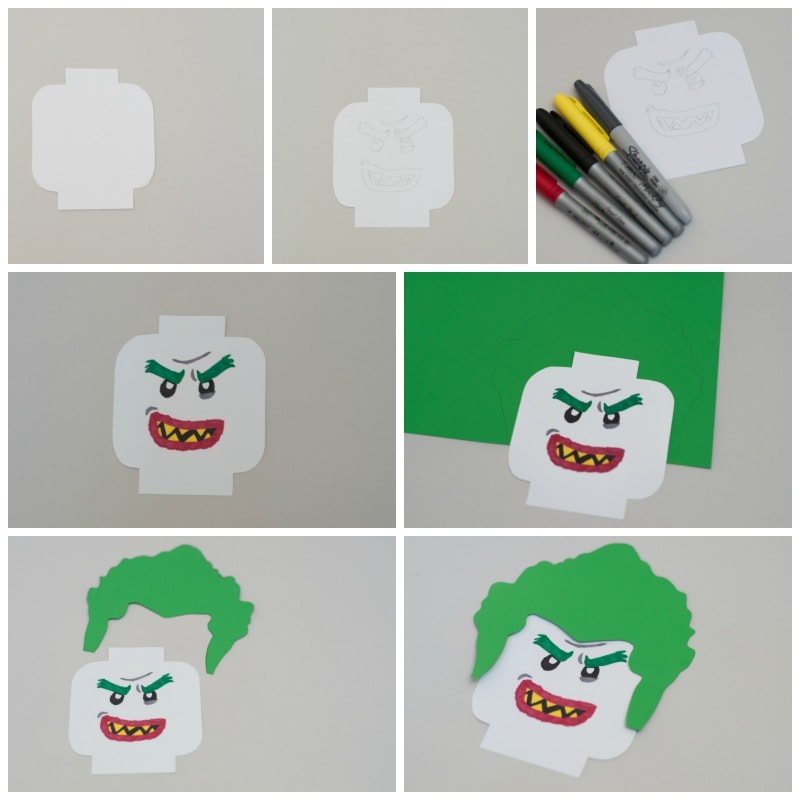 As you can see there is a lot of free hand drawing with this craft, but you don’t have to go as detailed as we went with our LEGO Characters. But we just wanted to show some great options.

My boys are going to have a blast playing together.  We can’t wait to see this LEGO Movie on February 10th, it’s going to be AMAZING.  We LOVE Will Arnett and he’s going to be hilarious in it, since he was pretty funny in the The LEGO Movie that came out a couple years ago.

In the irreverent spirit of fun that made “The LEGO® Movie” a worldwide phenomenon, the self-described leading man of that ensemble – LEGO Batman – stars in his own big-screen adventure. But there are big changes brewing in Gotham, and if he wants to save the city from The Joker’s hostile takeover, Batman may have to drop the lone vigilante thing, try to work with others and maybe, just maybe, learn to lighten up.

Will Arnett reprises his starring role from “The LEGO Movie” as the voice of LEGO Batman, aka Bruce Wayne. Zach Galifianakis (“Muppets Most Wanted,” the “Hangover” films) stars as The Joker; Michael Cera (TV’s “Arrested Development”) as the orphan Dick Grayson; Rosario Dawson (TV’s “Daredevil”) as Barbara Gordon; and Ralph Fiennes (the “Harry Potter” films) as Alfred.

Hi, I'm Courtney and I LOVE crafting! I am a mommy to 3 awesome boys