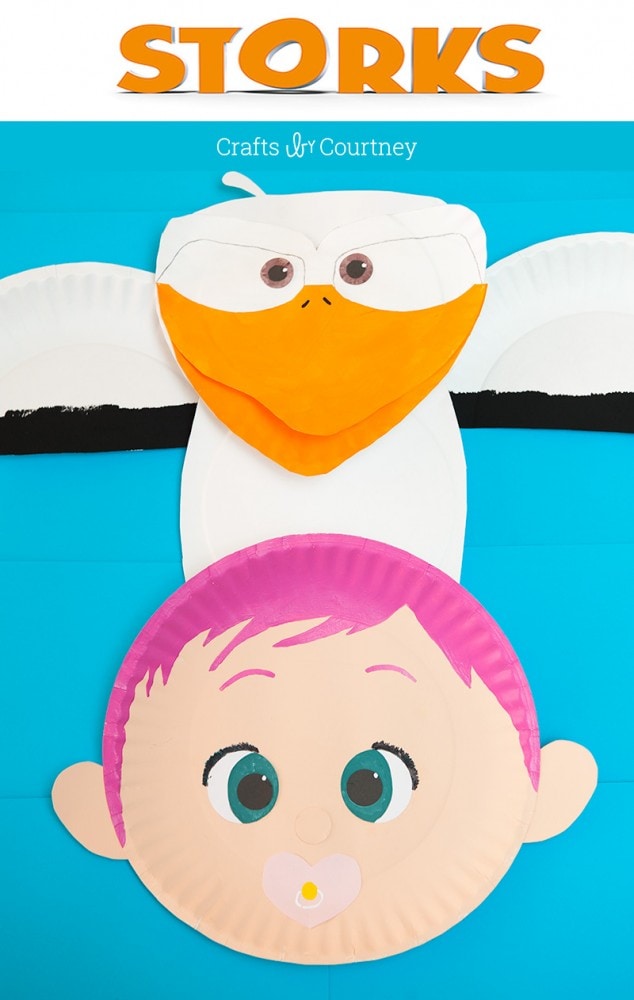 I’m very excited to share my craft today. I’ve teamed up with Warner Bros. Pictures and I made some great paper plate crafts based on their new animated movie STORKS.

I have three boys and the movie trailer has been seen several times here. They are so excited to see it when it comes out in theaters this weekend!  I’m actually pretty excited too, it has a lot of actors I love in it. Andy Samberg is hilarious. 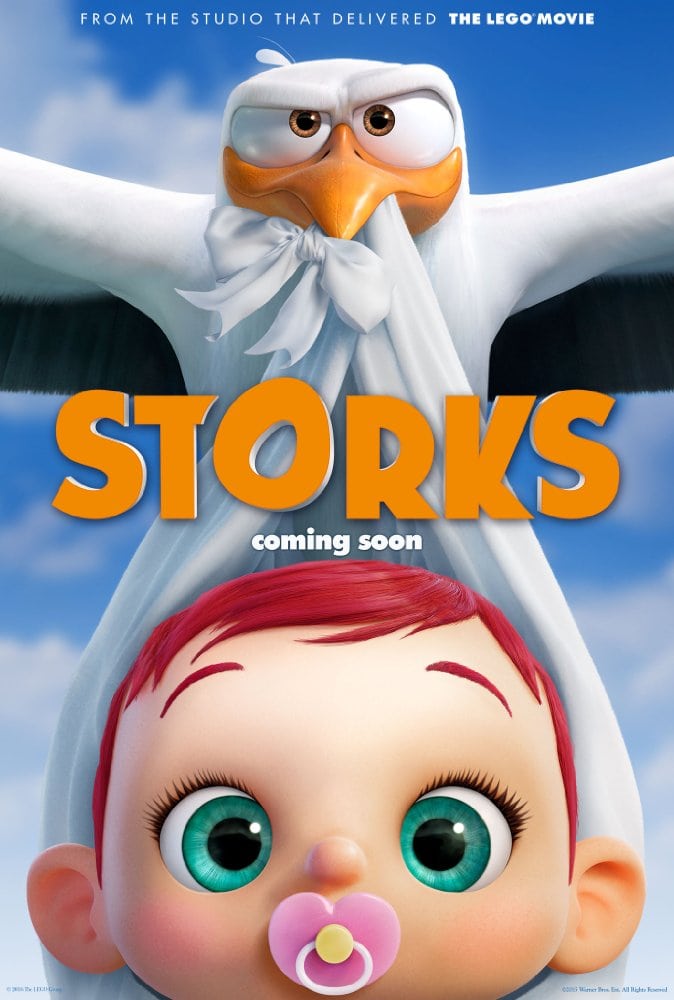 So when I was asked to make a craft based on the new movie I was really excited for the challenge.  I took a look at some pictures and was inspired!

The Baby and the Stork!! I got started right away with my ideas.

I started off painting the paper plate beige for the skin color, then a used my “trusty” circle punches for the eyes. I found the perfect shade of paint for the eye color and used the smaller black circle for the center of the eye.

Then I drew out the hair line with a pencil and filled it in with some paint. 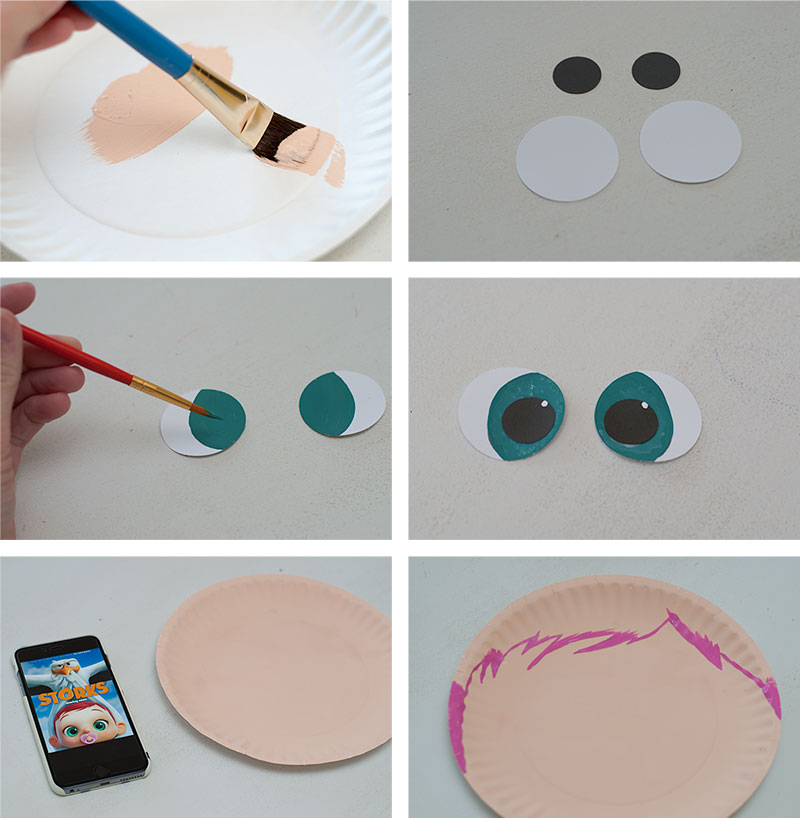 I had some pink cardstock that I cut into a heart for the paci, and painted in the details. Then I added in my eyebrows using a thin paint brush.

The eyelashes are so prominent in the pictures.  So I used a sharpie to fill them in, nice and full! 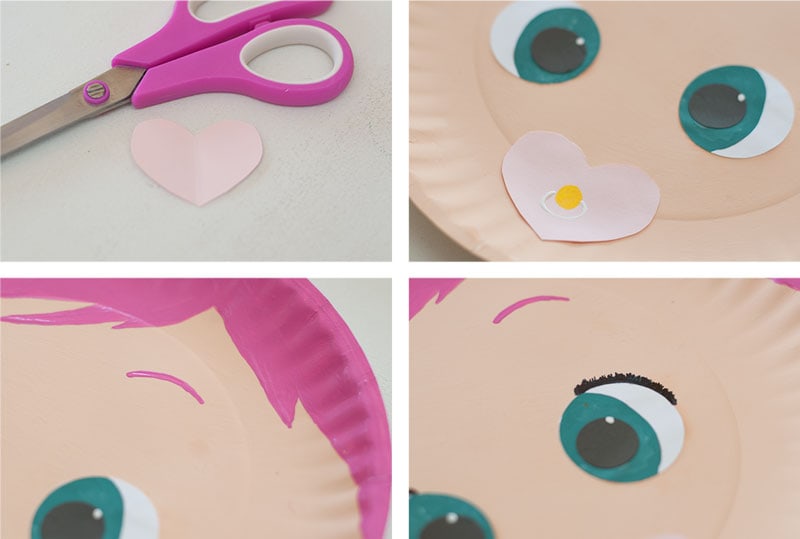 To finish the baby, I painted another paper plate beige for the ears and nose and cut them out. 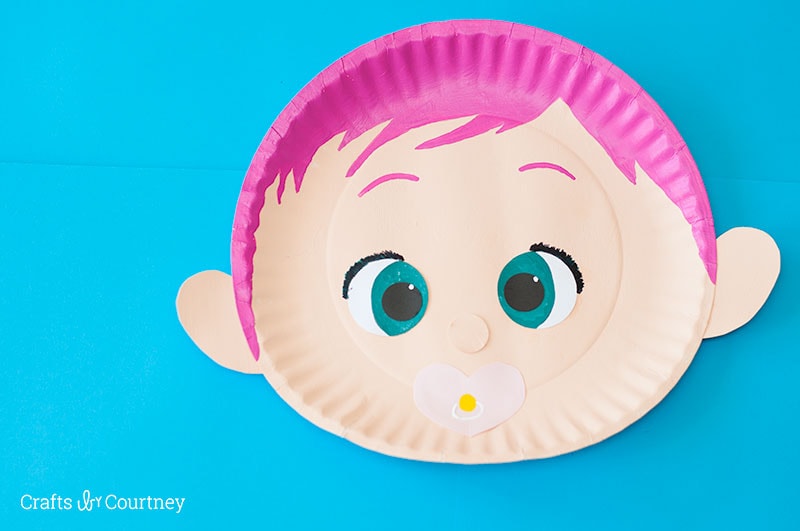 Now it’s time for the Stork!

I bent over a paper plate and cut my beak shape out.  I grabbed some orange paint and painted in the beak.

Next, it was time to make the face shape. I really wanted the eyebrows to stand out.  I traced out my shape and cut it out. Then I drew in my eyebrows with a pencil.  I didn’t want to use a marker I just wanted it to look shaded in with a pencil. 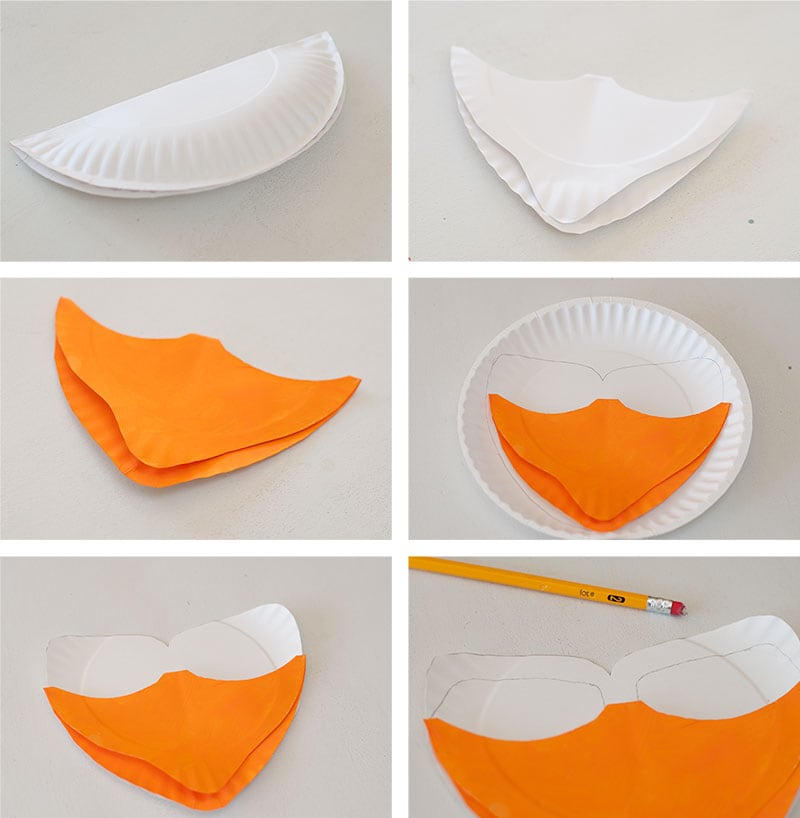 I used another paper plate to create the top of the head and of course that feather!! Then I glued the head and beak to the paper plate.  I made sure to bend the eyebrows over so they would really stand out.

Next, I worked on the eyes. I used my “trusty” circle punches again.  I didn’t have the right color cardstock for his eye color so I mixed some brown and beige paint together for the eye color.  I think it came pretty close! 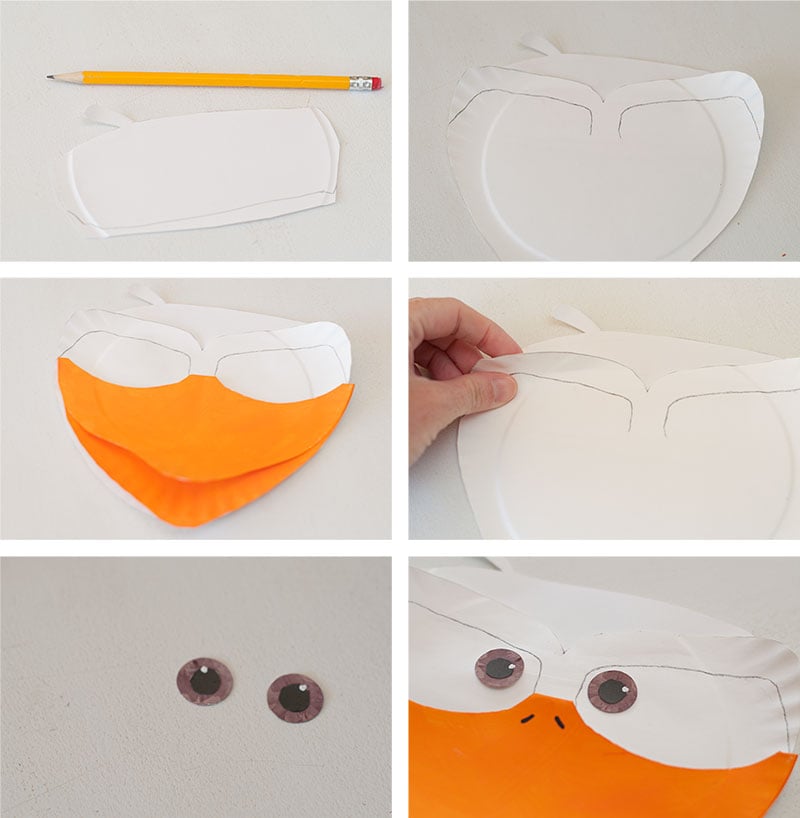 After I finished the craft I felt it needed something extra.  I cut a paper plate in half and painted the bottom black for his wings and feathers. Then I used another paper plate for his body. 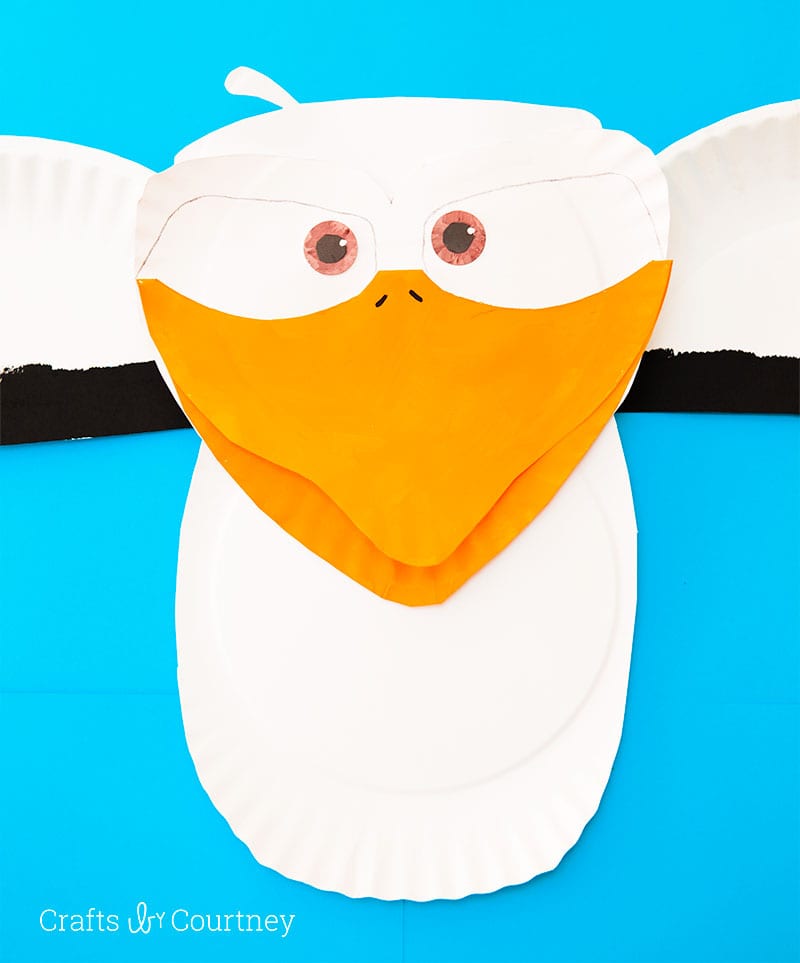 There you have it!!  All finished, now we’re all really excited to see this movie!! I think it’s gonna be super cute.  I’m really glad I was able to make these crafts using just a simple paper plate and some paints I had on hand. Paper plate crafts are simply the best! 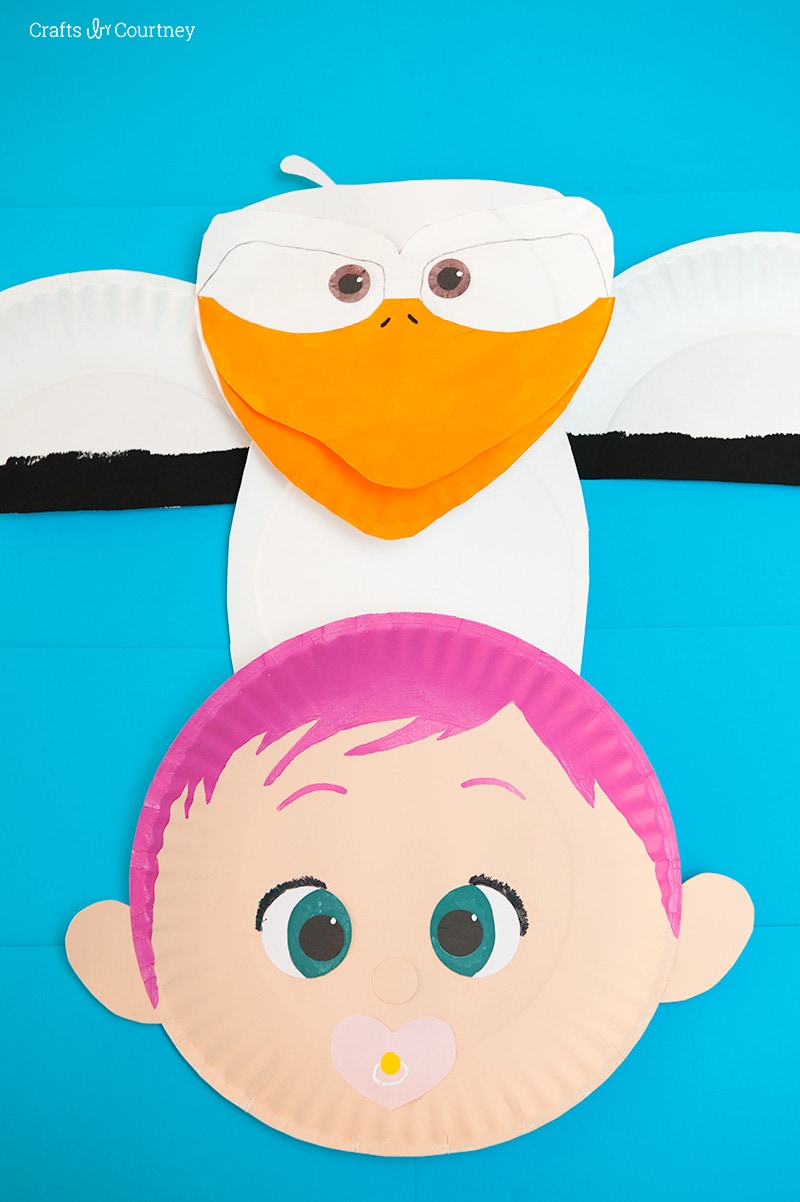 From the studio that delivered The LEGO Movie. STORKS, in theaters September 23! STORKS is in theaters this weekend. Grab your flock and make a family day at the movies!

About the new animated movie

Storks deliver babies…or at least they used to. Now they deliver packages for global internet giant Cornerstore. Junior, the company’s top delivery stork, is about to be promoted when he accidentally activates the Baby Making Machine, producing an adorable and wholly unauthorized baby girl. Desperate to deliver this bundle of trouble before the boss gets wise, Junior and his friend Tulip, the only human on Stork Mountain, race to make their first-ever baby drop – in a wild and revealing journey that could make more than one family whole and restore the storks’ true mission in the world.