Before starting this project, you’ll need the following materials:

I’m so excited to get started on Christmas crafts with my boys this year. I just love a Christmas craft, who doesn’t right?? I’ve posted several already and really wanted to add a SNOWMAN this year.

Side Note: If you like snowmen, then you’ll love this cute popsicle stick snowflake ornament craft the boys made.

There are so many ways to create your toilet paper roll snowman. I couldn’t choose just one way, so I did THREE!! For this tutorial, I’m just showing step-by-step pictures for the cardstock and painted snowmen.

To get started, you’re going to need toilet paper rolls!! Just decide how your going to cover your rolls. I have paper and paint in the getting started picture, but we also used felt. I grabbed some buttons and orange cardstock for their faces.

For the HAT, I used an arm band. I’ve seen people use socks, but I thought the arm band was super cute.

For the ear muffs, we used some pom pom balls and a pipe cleaner. Once we had our materials we were ready to get crafting!! 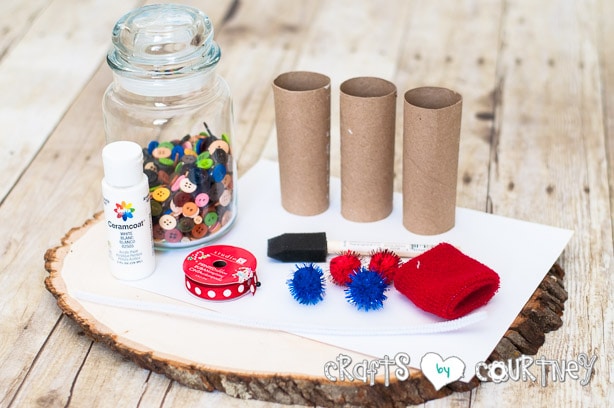 I had my two year old paint his toilet paper roll since that would be easiest for him to do.

I had to bribe him with a cookie so he had chocolate all over his face. ;-)

Since my oldest is becoming a BIG BOY crafter, I let him use my “Trusty” hot glue gun (supervised of course) and he did a great job!! He was very excited to use it.

He hot glued on the eyes, nose and mouth. I cutout orange cardstock for the “carrot” nose.

I added glue to spots where I wanted my 2 year old to add his buttons and nose. That worked out perfect for him. I know if I let him use the glue himself it would be all over the place.

I did a couple different styles for the hats. My 5 year old wanted ear muffs. We cut a pipe cleaner to the length we needed and hot glued it into place. Then, we picked out some SPARKLY pom pom balls and hot glued those to the bottom of the pipe cleaner.


I used the arm band for my two year old’s snowman, since that would be the easiest for him. Well, I thought so…he wanted to take the arm band and run around with it!

Once we were DONE with our snowmen, my little guy thought we needed some arms. We went out into the backyard, and grabbed a ton of little sticks.

Then, I used my “Handy Dandy” X-Acto knife and cut small slits on the sides of the snowmen and gently pushed in the sticks.

My boys did such a great job with their snowmen!!

These are the three I worked on. The first one is cardstock, second was felt and the last was painted.

Quick Tip: Keep the slits small, and you WON’T need glue to keep the arms in place!

As you can see (from my little bears’ faces), they had a lot of fun making their snowmen. We made SO MANY, now we have a complete family (except a mom) Guess I need to make another one now…

This really is a simple and easy craft to do, and I loved seeing what my little guys came up with.

I hope you enjoyed this craft as much as we did making it!! Enjoy your holiday!!

Happy Thursday friends! One of my favorite decor a

One of my favorite pieces in my master bedroom is

After being in our house for 7 years we finally de

It’s Sunday! I’m so excited for this beautiful